Why are so many people joining Pokemon death cults?

There is something troubling going on in the politics of the Pokemon universe. In the first four RPGs of the main series, the antagonist is a shadowy organization with curiously loyal grunts setting out to harness the power of some legendary Pokemon in order to establish a New World Order. Team Rocket, Team Galactic, Team Magma, et al., all of them want to bring “peace” through domination.

If the Pokemon world were decimated by internecine conflict or even going through some kind of economic recession, I could understand why so many young people might be vulnerable to the promises of a cult like this. But in all my conversations with NPCs, I have never heard someone complaining about not being able to find a job, or having insufficient disposable income to satisfy their basal requirements, or really anything at all other than the death cults. We play these games through the eyes of adolescent protagonists, so maybe the adults are all sparing us the complexity of the social issues, because it makes no sense that a pattern of death cults is a society's only problem. They are an effect begging for a cause.

The most telling indication of economic troubles that might undergird revolutionary impulses is the single-industry commerce. Even in the large cities, the only things to buy are Pokemon supplies. Veilstone city is the best candidate for some kind of regional commercial center. It's got docks, cargo, and a gym challenge to attract tourists, and at least in the Sinnoh region it's a population heavyweight with four residences. Yet the only store is a department store for Pokemon supplies and the largest employer is Team Galactic, whose stated mission is to control the world in order to bring peace. Peace from what?

Because we can use the same currency (Pokédollar) in multiple regions, we can conclude two things about the Pokemon economy

For most of human history, commerce took place between people who knew each other, not strangers. Today we take it for granted that bills we receive are not counterfeit, or conduct our business in the form of wires or ACH or debit or whatever else without thinking about all the fraud prevention work the institutions moving that money do on our behalf. Without these institutions, it was hard to trust a random stranger passing through. If they defrauded a shopkeeper with illegitimate currency, who would hold them accountable?

During the colonial period of US history, most transactions were recorded in a ledger of interpersonal debts. Gordon S. Woodward says of commerce at the time:

Merchants, shopkeepers, and craftsmen all tended to regard their businesses as a series of personal transactions with familiar persons. Their records exhibit these personal relationships—a single page of their ledgers for each person they dealt with.[a]

In fact, it was so essential for accountability that the two parties were local and knew each other that there was no freedom of movement. Some places would literally force you out, if you were trying to travel through and buy things.

Under the warning-out laws, for example, towns could legally eject “strangers” and have constables convey them from town to town until they were returned to the town where they legally belonged.[a]

For it to be possible, as it is in Pokemon, for us to travel throughout regions and use the same currency, there must be some powerful government regulating inter-regional commerce and controlling the currency.

Quantifiable currencies and debt are not separable concepts. Numbers and debts come into the world together. Debt historian David Graeber describes it this way:

Not only is it money that makes debt possible: money and debt appear on the scene at exactly the same time. Some of the very first written documents that have come down to us are Mesopotamian tablets recording credits and debits, rations issued by temples, money owed for rent of temple lands, the value of each precisely specified in grain and silver.[b]

But what form does the debt in Pokemon nation take? We know people work. There are mines in Sinnoh Region; there are shopkeepers in every city; there is a Pokecenter operated by a clone of nurse joy within 300 paces no matter where you go. But money doesn't seem to be good for anything outside of Pokemon supplies. We never worry about food, housing, education, or gadgets. They're all free. And based on how common it is to interact with an NPC and receive a valuable gift from them no-questions-asked, it seems like people have plenty.

Most curious of all, small towns with next to no evidence of commerce have high-tech infrastructure and live a life of leisure. Celestic town has two residences and one small Pokemon supplies shop, and half the citizenry is taking a walk or pacing all hours of the day. I don't know from whom the municipality would be raising taxes, yet there is a free Pokemon hospital with all the amenities in good repair. Where is the money coming from?

The Pokemon World is A Post-Scarcity Communist Regime

The one way to tie all of this together, that I see, is that the national government commands so many resources that very few people need to work. If they've secured the cooperation of (or enslaved) a sufficient number of capable Pokemon, maybe that meets the total of the labor demand excepting specialized jobs like constructing a mine or social jobs like shopkeeping. In our world, centrally planned economies tend to implode because information about scarcities can't propagate through them fast enough, but if there's no scarcity, state-planned communism just makes sense.

In this theory, the money is single-industry. Things like housing, healthcare, gadgets, transit, etc wouldn't need a currency to track. If there's no scarcity, there's need for debt and therefore no need for numbers to measure it. That the Celadon Casino in Kanto region (pictured below) grants entry to adolescents is consistent with the Pokemon currency being domain-specific, otherwise these people are letting children gamble life fortunes. I suspect the jobs we've mentioned are conscripted like a fixed-length mandatory service to country, plus non-monetary compensation of some kind because none of the miners seem upset that they have to operate a mine while others get to sit and read books behind shop counters.

But outside a brief conscription you have a real social problem. The ideal form of a job, as in the anarcho-primitive form, is a way to find fulfillment through devotion to one's community. Without some kind of community fabric, which could be almost anything as long it's inclusive of all citizens, like sharing art or scientific research or a grand national effort, public policy risks atomizing society into sad, idle loners.

From a policy perspective, creating a limited meritocracy around Pokemon battling is genius. The artists can go be artists. The researchers can go research. But for everyone else who doesn't care about that stuff, and wants rather to indulge their natural human instinct to exploit and dominate nature, there's a way to contextualize oneself.

The heavy-handedness of the rhetoric around Pokemon battling fits into this scheme as well. How many times are we told that Pokemon “like” to battle. If it is in fact a Pokemon-slavery-based utopia everyone is living in, society needs to numb people to the suffering of Pokemon and normalize their abuse.

There's a famous philosophical short story by Ursula K. Le Guin, The Ones Who Walk Away from Omelas, about a perfect utopia dependent on the suffering of one defenseless victim. Some people, when they learn that the utopia is founded on abuse, leave. In the Pokemon nation, the elders can protect against the threat of defection by indoctrinating children into the abuse at a young age, which may be why so many trainers are not even sixteen yet. By the time they're of age to question things, they won't be able to without the immense discomfort of their own guilt and the possibility that if they find uncomfortable answers it would require them to alter their way of life and alienate them from their existing social network.

To resolve this cognitive dissonance, people defect from the dominant ideology in two directions. Some people double down and join cults like Team Rocket and Team Galactic, where they shut their minds to the pain of victims. They identify completely and totally with the abuser and want to capture legendary Pokemon to exploit them in world domination campaigns.

Others join cults like Team Aqua, who want to expand the oceans to drown human port cities in order to give Pokemon a better chance at life on earth. They flip sides, identifying completely and totally with the victims. They are even willing to die themselves. Yet even the martyrs in Team Aqua rebel against the Pokemon world's institutions using the logic of those institutions: in order to expand the oceans, they want to exploit the Pokemon Kyogre, which they bungle, almost drowning Earth in the process. 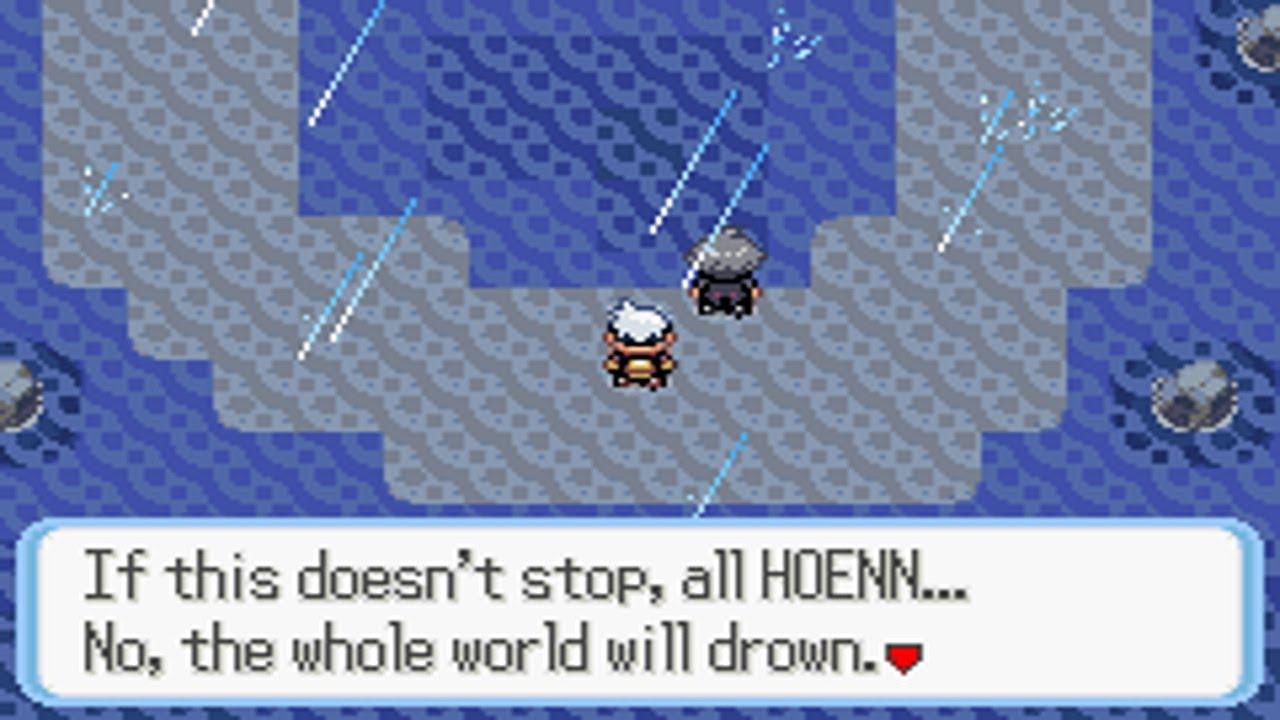 In the end the psychology of submission to a cult in the Pokemon world makes a lot of sense if we assume Pokemon oppression (and very little sense if we don't). These people are idle and materially comfortable, yet ailed by guilt over the fact that that very comfort is contingent on the oppression of the creatures they claim to love.

[a]: The Radicalism of The American Revolution, by Gordon S. Woodward